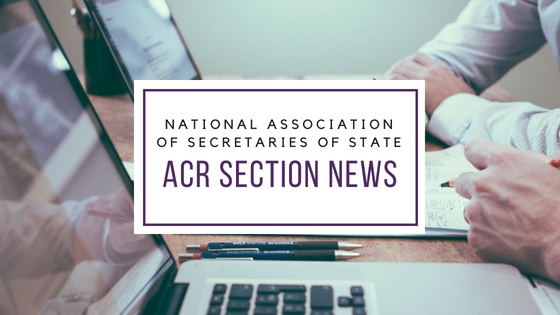 WASHINGTON, D.C. – The Administrative Codes and Registers (ACR) Section of the National Association of Secretaries of State (NASS) today announced the election of its new slate of national officers for a two-year cycle. Oklahoma Associate Editor Christopher Coffman will serve as president of the group, which includes administrative rules professionals from the federal government and all fifty states, as well as the District of Columbia, Puerto Rico, Guam, and American Samoa.

"I am honored to be serving an organization composed of talented professionals dedicated to advancing public awareness and access to the regulatory process," said Coffman, who has served with the Oklahoma Secretary of State’s Office since 2007.  “I look forward to working with our elected officers to further advance the strategic mission of our organization.”

The national officers were elected by full member vote at the NASS 2018 Summer Conference held July 13 to July 16 in Philadelphia, Pennsylvania. They will serve a two-year term ending in July 2020.

Formed in 1978, the NASS Administrative Codes and Registers (ACR) Section brings together federal and state government professionals--often employed by Secretary of State offices--who are responsible for reviewing and compiling government rules and regulations. Some members also oversee the production of "blue books," which are official government directories and fact books for the states.

ACR members are committed to fostering the development of better rule-writing skills and rule review techniques and developing more effective management of the rule promulgation process, particularly in the publication of administrative codes and registers. They are also focused on increasing public access to the rulemaking process.

ACR also produces the State and Federal Survey, a biannual survey of codes and registers, comprehensively documenting the operations of state and federal administrative rules “gatekeepers,” publishers and reviewers.